First, let’s talk about each of these thermometers before we jump to the comparisons. The MeatStick is almost a carbon copy of the Meater, but they did a few things right. The MeatStick is a wireless thermometer, meaning there are no wires attached to the probe, and it transmits all the temperature information wirelessly to an app on your smartphone.

The MeatStick is available as a standalone probe with a Bluetooth extender and a Wi-Fi bridge.

The MeatStick probe on its own will give you a range of about 65 feet, but if you get the MeatStick with the Extender, which doubles as the charging base, you will get about 260 feet of Bluetooth wireless range. If you opt for the bundle with the WiFi bridge, then Internet access is the only range-limiting factor, meaning you can access the MeatStick from anywhere.

In all options, the MeatStick is the same “probe hardware.” Whether you get the extender combo or the WiFi bundle, it’s the same probe. The bases are what are making the differences in range, but the probes are the same device and have the same components and temperature tolerances.

You can read my full review of the MeatStick to learn all the details about this meat thermometer.

The Meater ( and Meater Plus )

The Meater started the truly wireless smart thermometer revolution. Both the MeatStick and the Meater are not only absolutely, definitely wireless, but they are also smart. Their smartphone applications have built-in algorithms that predict and estimate when the meat will be done at the doneness level you choose.

I wrote a complete review of the Meater explaining everything there is to know about this amazing product. But since this is a comparison article on these two popular probes, let’s jump in and compare them.

You can read our full review of the Meater Plus, which goes into greater detail about his thermometer.

Read More: The Meater Plus Review

The MeatStick Vs Meater: Differences and Compared

Both manufacturers have done a great job of highlighting the benefits of their thermometers, making it hard to choose between these two probes.

I don’t want you to misinterpret what I’m saying. Both the MeatStick and the Meater are good, and you won’t be disappointed by either one of these two products.

However, if you are on the fence about which one to get, let me break down the major differences between these two probes.

The first and most important difference between these two thermometers is their wireless range. Both brands use a Bluetooth repeater to boost their signals, and both provide WiFi bridges for connecting to your home wireless network. Wireless range and other features I mention below earned the MeatStick a top spot on our wireless meat thermometer roundup article.

So let’s break down the range of these probes one by one so you can understand the differences.

Meater has three main products: the Meater, the Meater Plus, and the Meater Block. As far as the probes are concerned, they are all the same hardware; what changes is the range in all their models.

MeatStick also has three main variants of their probe, with the only differences being range. The MeatStick ( just the device and charger ), the MeatStick X ( bluetooth extender and repeater), and the MeatStick with the WiFi bridge.

The Meater, which is the original device, on its own has a range of 33 feet, as does the MeatStick ( just the probe ).

Without their extenders, both vendors’ probes have a limited range. This is okay for those who want to get one of these devices at a low cost and don’t mind the range limits.

However, it is important to note that the estimated 33-foot range of these probes is achieved when the probe’s head is not covered and exposed. Meaning if you use the probes inside an oven or a thick-walled grill like a kamado grill, the range will reduce drastically, to more like six feet.

Both brands then have a second-tier bundle, which is their probes plus a signal repeater that doubles as the battery charger. This is the Meater Plus and the MeatStick X, and here is where the differences are benign.

I tested the MeatStick Mini, which is a small mini version of the MeatStick but does come with the extender, and I have to say, you get every inch of those 260 feet.

Both brands have wireless blocks that can connect to your home WiFi, and when it comes to wireless range, the limiting factor is your home wireless setup. So, if your wireless network can reach your patio or wherever the WiFi block is, the probe and receiver will be connected to the Internet.

The WiFi block then sends the signal to the cloud (via the internet) and accesses all the information from the cloud using the internet. This is how both brands work, and it is how you get whole-house coverage and the ability to monitor your cooking session while you shop or go for a Sunday ride.

Both brands offer cloud technology to give you access to your temperature data from anywhere, but there is one small difference that might be a deciding factor for some related to getting wireless functionality with both of these devices.

To get wireless functionality with Meater, you have to purchase the Meater Block, which includes the charging block with a built-in WiFi bridge and four probes. With MeatStick, you also have to buy the MeatStick WiFi bridge, but you get two probes instead of four. The setup costs half as much, and you can always add more probes later.

As far as functionality goes, both brands give you a Wifi block with a built-in display that shows the cooking temperatures, cooking times, and signal strength.

This is one area where I have not found obvious issues with either brand, but as I was reviewing the Meater instruction manual, it did recommend not to pull the meater by the head if it’s exposed to extreme temperatures or past its 572 degree resistance mark.

I can assume that the reason is that heat can loosen whatever adheres the head to the metal part of the probe, and, well, you will have a real mess on your hands.

Meater is also adamant about not using their probe over direct fire or charcoal. Something that MeatStick does not mention but does say not to exceed their specified temperatures.

One thing worth noting is that the Meater has a small mark on the probe that lets you know how far to insert it into the meat, both for accuracy and to protect the internal components. The meatick must be inserted completely or it will be damaged. Remember that batteries and other components are inside these little tubes.

These two brands offer many of the same features, and besides their Bluetooth range, you get a lot of the same features with both. One area where the MeatStick shines compared to the Meater is in their LED charging status light. I know it’s a minor point, but I like how the MeatStick lets me know exactly what’s going on when it comes to charging the probe. To me, this is something I like but is not a big deal.

In the Meater, there is no LED light indicating how the charge is going; instead, the Meater charges “passively.”

This is another area where these two probes differ. The MeaStick app is very responsive and works well, but I feel the Meater’s app looks nicer. This is again a preference thing, but to me, the apps on these two devices are pretty much the same.

This is another area where these two brands have some similarities but vary just a tiny bit.

The Original Meater is the least expensive model and costs the same as the MeatStick Mini. However the MeatStick mini has only a meat temperature sensor and no ambient sensor with range of 260 feet whereas the original

Both of these thermometers are great options. If you enjoy cooking BBQ and want to monitor what’s happening inside your smoker or grill and even while cooking in kitchen appliances, these are great products.

If you enjoy cooking or grilling but want to keep tabs on temperatures, these two thermometers are great products. However, the MeatStick can be fully submerged, so for those looking for a thermometer that can work in devices that use water to cook, the MeatStick takes the lead. The Meater also outperforms the Meater in wireless range, and the MeatStick is more affordable.

Still, both are great products. 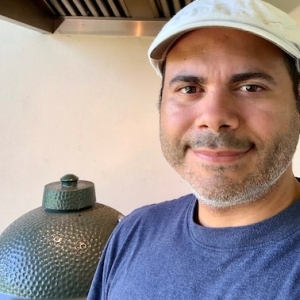 Hector Ruiz - President / Founder / Pitmaster Lives in: Winter Garden, Florida Bio: Hector is the president and founder of BBQ Grill Academy. Hector has been in this field for over 20 years. Culinary creator, pitmaster, and editor-in-chief. Using charcoal, wood, and fire, he has transcended the capabilities of traditional smokers and grills to craft extraordinary culinary masterpieces over the past two decades. He is an exceptional pitmaster and grill expert whose mission is to educate others how to master their grills and the diverse range of foods that can be cooked on grills. His ability and creativity extend beyond traditional barbecue recipes. Extensive expertise smoking briskets, pork shoulders using charcoal, wood, and propane grills and smokers. Email: Hector@bbqgrillacademy.com Facebook: https://www.facebook.com/bbqgrillacademy Linkedin: https://www.linkedin.com/in/hector-ruiz-36aba9201